Jan Ryant Dřízal is one of the most prominent personalities of the emerging composer generation. In 2014, he became the absolute winner of the Czech Philharmonic Composition Competition for the composition Kuře melancholik (The Melancholic Chicken). The composition was then performed in the Czech Philharmonic Orchestra’s 120th season and directed by Jiří Bělohlávek. He was also awarded the award of the Czech copyright association for the most successful young classical music composer of 2016. He is the holder of several other awards from international composition competitions and parades.

Dřízal collaborates with some of the most significant musicians of his generation, such as Marek Šedivý, Tomáš Jamník, Jakub Fišer, Milan Al-Ashhab, Jan Mikušek and Adam Plachetka. His scores have been performed and recorded by the foremost Czech orchestras, such as the Czech Philharmonic, the Czech Radio Symphony Orchestra, Pilsen Philharmonic Orchestra, BERG Orchestra or Kühn’s Mixed Choir. The scores have also been performed at numerous festivals, such as the Prague Spring, Smetana’s Litomyšl, Contempuls, New Music Olomouc, or Moscow’s Your Chance. Marginally, he also focuses on film scores and single-purpose music (film score to Šmejdi, directed by Sylvia Dymáková, BERG Orchestra Project Cinegoga, Zóna – multimedia project by Eliška Cílková working with authentic recordings of abandoned pianos in Chernobyl). His compositions are regularly recorded and published by the Czech Radio. He is represented by OSA (Czech copyright protection association for author rights), the Dilia agency, and is a member of the Czech artist society, Umělecká beseda.

Having finished a music-focused secondary school, Dřízal started studying at the Prague Conservatoire, in the composition classes of MgA. Otomar Kvěch. At the same time, he started his studies at the Faculty of Arts at the Masaryk University in Brno, where he majored in Theory and history of film and audio-visual culture. He successfully graduated both of these schools in 2012 and was accepted into the composition class of doc. Hanuš Bartoň at the Academy of Performing Arts in Prague. He has participated in several composition masterclasses, where his work was evaluated by major domestic and foreign composers (Trstěnice 2010, 2016; Postfest 2012-2016; Soozvuk 2010). In 2013, he studied for six months at the Estonian Academy of Music and Theatre in Tallinn, where he focused on composition and orchestration under the supervision of Tõnu Kõrvits. He also visited Erkki-Sven Tüür’s studio at the island of Hiiumaa. He recorded an interview with this composer and consulted his work with him. The year 2015 saw him taking part in the international symposium for contemporary music at the Liszt Academy in Budapest as well as becoming the resident composer of the Berg orchestra at the Krzysztof Penderecki Music Institute in Poland. In the same year he was admitted to a sixmonths’ residency at the Royal College of Music in London, where he attended composition classes given by Dai Fujikura. He co-founded the Music Academy of Performing Arts contemporary students’ music ensemble,Ensemble Terrible. Since 2016, he has been working at the Theory department of the Prague Conservatoire. 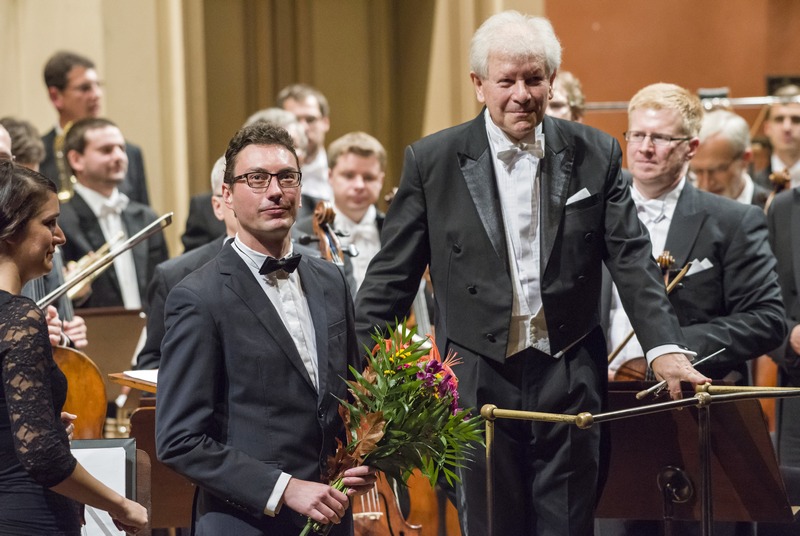